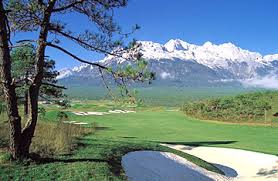 Following on from Scottish Bob’s blog series on the Oldest Golf Courses of the World by continent in 2017, Bob now turns his attention to some of the lesser known courses around the world, this time its the turn of Jade Dragon Snow Mountain Golf Club…

This magnificent golf course set in the bottom of a valley which faces the famous Snow Dragon Mountains which stands at 18,360 feet in the Yunnan Province of China.

This 18 hole par 72 golf course was opened in 2001 and is the longest regulation golf course in the world, measuring 8548 yards from the pro tees & earning themselves a place in the Guinness Book of World Records.

Situated at a height of over 10,000 feet above sea level making it the highest golf course in China and the second highest in the world after La Paz in Bolivia standing at 10,964 feet.

However, when playing Jade Dragon Snow Mountain Golf Club, at this height, the ball is known to travel 20 percent further due to the thinness of the mountain air.

The front nine of this golf course has a Scottish feel to it, while the back nine is undulating and mountainous, the back nine couldn’t be more contrasting.

The two sets of nine have completely different characteristics, with the Par 5, 5th hole, standing at 711 yards which is the longest par 5 in the world (Seriously!!).

The caddies are from the Local “Naxi” people who have lived in the area for generations and who wear their traditional costumes.

And no matter where you are playing your shot from you will have spectacular views of the snow -capped mountains.

In addition, this is also the Southern Most Glacier in the Northern Hemisphere, the mountain range stretches for 22 miles and has a width of 13 miles.

This beautiful place is not just for golfer’s, but with an abundance of different plant species on show and wildlife.

No matter what part of the Snow Capped Mountain you visit, Jade Dragon Snow Mountain Golf Club is a truly unique place.

More articles from Bob… Golfing in The Antartica …