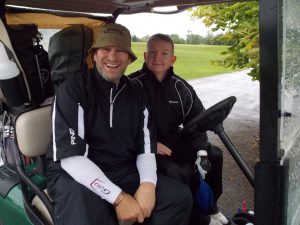 Playing golf socially with friends can be a pleasing experience, add a bit of competition and it makes the experience even more enthralling. Sharing a Golf Buggy with unknown opposition is an entirely different matter!

Sharing a Golf Buggy– It all started with such good intentions…

I’ve now been playing golf for a couple of years just monthly, in the society about ten times a year.

My handicap has stuck at the agreed 32 mark; I’m not really competing at events but still thoroughly enjoying my new past time. The golf shop in Chelmsford market (sadly no longer there) is a source for new or second-hand equipment.

I’ve now secured a set of graphite Mizuno TZoid clubs, a mix and match group of woods and rescues, with a broom handle putter.

John the proprietor of the golf shop spots my enthusiasm and tries to assist in me acquiring all the right gear.  The putter is his idea, he also states that Henry Cotton had all his clubs the same length something I should consider?

This we did, I traded in the Mizuno’s (after a few rounds) for a set of Callaway Hawk Eyes which he fitted to all the same length other than the sand and gap wedge. So it was me who inspired Bryson Dechambeau!

Anyhow now clad in my new golfing attire and with the newly fitted clubs I arrived at Burnham Golf Club fit for purpose or so I think.

I’m drawn in a group of golfers who were playing off circa 15, so quite handy players.

On chatting to one of the players, we discuss why I should have taken an iron on the tee at a par three instead of the rescue, which I have hit too long.

It becomes apparent very quickly that I have no idea how far I hit the ball with each club; in fact I am focusing so much on hitting the damn ball, that direction is irrelevant.

The respect I have been offered by the society for playing on one leg has waned; quite rightly they think I should be improving from the handicap they gave me.

A bit disenchanted I finish the round in a lowly 14th, 3rd from last.

One of the group approaches me in the car park, his father is disabled and plays golf regularly.

He says “Paul my old Dad has his own golf buggy and plays regularly“… “I’m sure you would improve if you had a buggy and contemplated joining a club?”

I thought carefully at what has been said…do I take the plunge and join a club, how much would all this cost?

Firstly I would need to purchase a buggy and perhaps take a few lessons?

I have never had any natural ability at sport, I’ve always had to work hard to achieve anything involving games.

I’ve played chess for Essex a game my father taught me at an early age, I studied openings out of chess books, played both Nigel Short and Murray Warren both chess grand masters, but my claim to fame was beating Terry Marsh the fighting fireman.

As usual, I digress, nevertheless the pep talk from these society members kick-started me into action, I know now that I  want to be as good a golfer as I can!

Sharing a Golf Buggy – Who are you…

So a quick trip onto ebay reveals a single seat golf buggy for sale in Kent, with a few days I am its new owner.

Golf buggies for older or disabled players are as important as the clubs in your bag.  In fact, a lot of us cannot play the game without the blasted things.

Sharing a double buggy can be an interesting experience, and one I do regularly… my reasoning for getting my own single seat machine follows…

The Pro’s:  It allows two of you the bliss of being together for 4 or more hours. (Great if you both get on) even better if you hit the ball in the same direction. It can keep the rain off, save you energy; keep you cool and can make for quick golf.  They also allow you to carry loads of refreshments, and stacks of golf balls.

The Cons: They can be expensive to hire and you may be forced to sit next to somebody you don’t like for four or more hours also the driver maybe so bad that you cannot concentrate on your golf for fear of drowning in the lake the driver did not know existed until you careered towards it, or fear being crushed as you assume the wall of death position, while circumnavigating the side of a bunker while your buggy partner attempts to re-enact the Indianapolis 500.

On many occasions, I have considered leaping out away from the runaway death trap while the driver (talking on his mobile phone) hairs toward certain doom, utterly oblivious of the 200-foot drop he is driving towards!

Attracting the attention of a golf buggy driver is not an easy affair.

I was introduced to ‘Steve’ at the club house, he seemed a decent enough chap and was to be my buggy companion for the day, although I did notice he was chain smoking.  Anyhow we were out in the fresh air.

Steve apologised just before we set off, that he was a cricket nut and would need to listen to the test match (through headphones) on his Walkman. 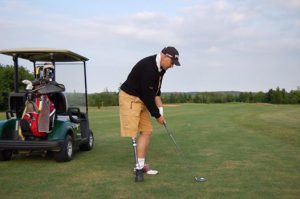 What he also failed to tell me was he did not have a driving licence!

Off we set with clouds of smoking billowing from the exhaust of the machine and from my playing partner Rothmans Super King size cigarette as we back-fired our way down the first fairway. (From the air we must have looked like a damaged Battleship in the attack on Pearl harbour).

Conversation was impossible amongst the smoke and noise from the engine, which was as fine-tuned as a dumper truck.

That we found our balls was a miracle, the suspension on this bone cruncher, had nigh shattered my eye sockets, my vision was so blurred by the smoke and the lurching ride made me feel dizzy it was like getting off a fairground ride.

I went to select my club, bang went the exhaust Steve was off in clouds of smoke like a dragster as Santa Pod, Steve!!

The two walking players in this four ball looked over in disgust at the commotion we were making.

Steve had played his shot, while being unplugged I managed to attract his attention by wildly waving my arms like a demented Morris dancer.

Steve realising that I was stranded clubless, fired up the ‘Mad Max’ sound alike buggy and proceeded to deafen this part of Essex.

Through smoke, petrol fumes and the smell of nicotine, I tried to play a good round, it was like playing golf during the Battle of Waterloo.

Steve was so engrossed in his cricket, he was not conscious of the commotion we were causing.  “100 for two he barked, Cooke’s got a half century”.

I just managed to pull my head in a Steve drove us through a Hawthorn bush, it spines tearing at the fragile fibreglass structure.

Out came the sandwiches followed by a flask,…”Tea?” bellowed Steve, who was all of a foot away.

Is this what sharing a golf buggy is about?

He proceeded to continue driving the bone shaking brute sloshing tea from a thermos cup, clutching an egg sandwich in the other hand; his mouth was still puffing on the near dog-ended grout!

“FFS Steve!” I screamed you’re going to kill us, he had the look of ‘possessed demon’ in his eyes.

We had arrived at the next hole. “Cooke’s got 75 now” he muttered as he left the buggy parked half way up an elevated tee on a 1 in 2 camber.  I scaled out of the cabin more like a mountaineer than a golfer!

My nerves shattered from this eventful game I succumbed to just getting around the course intact without the need of medical attention.

All thoughts of a good golf score were long gone.  Just as I started to relax as we puffed along yet another fairway … I felt a stinging sensation on my chest!

Looking down I thought I was going to see the tell-tale sign of a black and yellow insect, but to my horror I saw smoke coming from my shirt I was on fire!!

“Stop the kart!” I hollered while trying to put out the flame that was now coming from my shirt, Steve looked across and grinned removing the now dead fag from his teeth, “Cooke’s got his hundred”.

“I’m on fire you fecking idiot!” I tore his ear-piece from his right ear… pouring water over the coin size hole in my shirt, the smell of singed chest hair hit my nostrils.

It was hot ember from Steve’s now dogend fag that had been the culprit.  I leapt from the buggy as soon as we came to a standstill rolling on the ground like an agitated puppy.

After the carnage had be dealt with, and tempers had subsided (Steve apologised and promised to buy me a new shirt) he went to get back in the cart and replace his ear plugs; I put my arm across his chest …. “Steve, I’m driving!”

Sharing a Golf Buggy – The next step…

Next month, I finally join a golf club and am confronted with rules and golf etiquette!