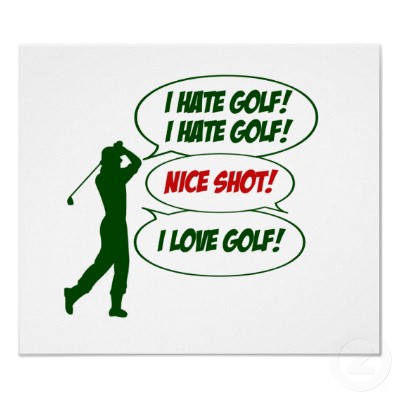 My Golf Obsession – When did my golf addiction really start?

Someone once said, “The key is to learn from failures and then keep going!”

Well back in the late 90’s Scuba diving was my thing. I loved nothing more than hauling on a dry suit and submerging myself into the murky waters of Stoney Cove or Gildenborough water.

In the summer, I’d brave the Channel and other exotic destinations….

As life does it throws you a curve ball. I picked up an infection at work, (remember I was a roofer) the long and the short of it was I was diagnosed with Necrotising Fasciitis (the Flesh eating Bug).

However, after what I like to refer to as ‘my lost weekend’ I emerged from hospital minus 5 stones in weight… and my right leg above the knee.

What’s all this golf to do with golf you say? Bear with me…. 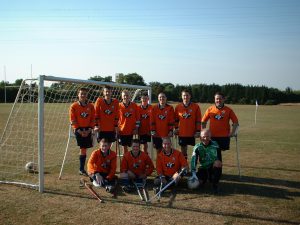 My Golf Obsession – What I did next…

After my amputation, I did return to scuba diving but it’s a tough sport with two legs, let alone one. I did do a three and a half mile charity swim for McMillan but my love of this adventure had waned somewhat.

I needed a different challenge…

Enter Amputee Football. This started but I met the England national team amputee goalkeeper (as you do), he  only had one arm!

He put me in touch with the Southend United Amputee Football team manager and I was part of this circus for three years.

Amputee football is seen as too dangerous to be included as a Paralympic sport, so right up my street.

Over the next  three years; I rose to the heady heights of Chairman of the club but again life made some changes and it was time to move on…. 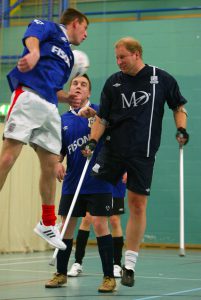 A colleague of mine at work used to shout out; “You look like a golfer!” every time I limped past his desk.

He was recruiting for the Council’s golf society. “How can I play golf I’d answer?”

“Plenty of one-legged golfers out there he’d retort“.

This went on for some time, one day he made his usual demand; I stopped looked him in the eye, and said, “OK, put me down for your next event“.  It turned out to be Manor of Groves, Hertfordshire.

Now, ‘time’ had moved on in golf club technology, the Slazenger XTC’s were no longer state of the art equipment.

In fact, when I dug them out from the back of the garage, they were not exactly in what you would call in tip top condition either.

But they will have to do I thought. It had been roughly 12 years since I have hit a golf ball, so off to The range I went.

Earlier I mentioned a quotation, which actually came from Sir Ranulph Fiennes. A man I deeply admire. So learning to swing a golf club with a bit missing can’t be that hard….can it?

Memories of those eventful outings with CT came flooding back.  This time around, I intended keeping the ball in play a bit more.

Life on a prosthetic leg can be kind of interesting.  The opportunity of crashing down onto terra firma is never too far away. Balance and stability are key to standing upright and keeping your remaining limbs unbroken.

Introduce the golf club, and life for the leg amputee gets slightly trickier.

I had a little over a week to nurture my swing into a competitive stroke, allowing me not  to look too foolish at the society bash.

The basic principles to hitting a golf ball on one leg are the same as with two.

Obviously over swinging is going to cause loss of balance, so having a more conservative swing with more focus on ball contact makes a lot of sense.

So with a few basic fundamentals in place I turned up at Manor of Groves anxious that I would not make a complete fool of myself.

What a day it was it was! It was a scorcher as the temperature rose into the 90’s, the other society members gathered. I knew a few from work to say hello but none you would call friends.

I was introduced to the captain, given a card “What’s your handicap?” said the secretary discreetly looking at my prosthesis which gleamed from my shorts.

“I don’t have one!” I exclaimed. In the past CT and I had played off 18 but that was wishful thinking even then).

Seemed fair to me (although I didn’t think I could be more than 28?!). 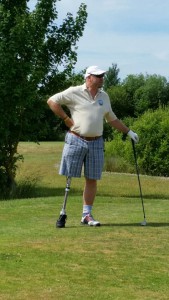 I was introduced to the four-ball I was playing with….

As you all know, Social golf is a great way of meeting new friends but being the new boy and being half robot does make you feel slightly apprehensive.

A suction socket on Prosthesis is sufficient in everyday life but for sporting activity and on a hot day, air expands and the stump gets sweaty.

So you tend to let out a fart like sound every time you get up from a chair especially getting out of a golf cart – what would these guys make of me?

I shared a bacon roll with my four-ball partners and made my excuses so as to collect my golf bag and get a buggy.

Thrupp off went my leg… charming the lady member of the four-ball exclaimed, my face reddened.

On the tee, I joined my colleagues, hit a scruffy shot down the fairway and took a big sigh of relief.

Thrupp went the leg; my female playing partner looked at me with disdain.

After a few holes, I was getting exceedingly hot, I had secured a few points and the two chaps I was playing with were nice enough, but the lady was a bit fierce.  She was a good player and very competitive.

On one hole she hit her ball into the rough; I thought she had given it up, so returned to my ball in front on the fairway.

She was very hot and bothered and hollered that she could still score if only she could find her ball.

I returned to help her search…Thrupp went the leg “That’s not nice” she exclaimed, “It’s very undignified“.

“I can’t help it!” I offered…Thrupp! We played on.

Now this lady was very well-endowed and she was perspiring heavily. Her shirt had become very sweaty in the chest area and was becoming a bit see through.

About this time the others players arrived to help in the search. Hands on her hips she ripped into them (one of them must have stared, a bit too intently at her now semi-transparent shirt on course etiquette).

“Are you looking at my chest she demanded!”  Thrupp! I tried to move uncomfortably away from the now intense debacle …only to hear her shout again “Will you stop farting, you rude man!” she screamed!

Needless to say, the rest of the round was a little tense, but I thoroughly enjoyed myself.

My Golf Obsession – Back at the Clubhouse…

Shooting well over a 100 I was pleased to contribute a few points into the match even if I was last.

I declined the club cleaning service offered, as I feared the rust and dirt were holding the clubs together.

I left early from the meal careful only to let my stump give out a gentle ‘Thrupp’ as I got up from the table.

I saw my male playing colleagues look over smiling, my female companion was not.

“Is that your leg making that noise?” someone asked…

“You’ll never know I replied!” and hastily made my exit.

My golf obsession had begun!