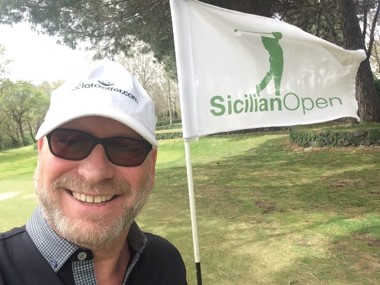 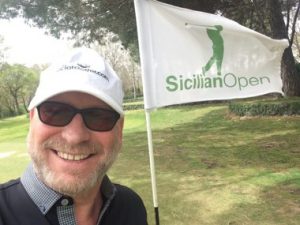 Having planted my ball on the 7th green at Peeble Beach (at the TSG Open Championship on a simulator!), the next thing I know I’ve won a golfing trip to Sicily courtesy of Golf Escapes and Il Picciolo Golf Resort.

And having added a few dates to our trip, here’s my review for my fellow Social Golfer members to enjoy….

Il Picciolo Golf Resort in the centre of the Mediterranean island of Sicily is situated roughly 50 miles from Catania Airport.

The hotel is over half way up Mount Etna the scenery is spectacular.

The hotel and course itself were built in 1989 but sadly the outside of the hotel reflects this and is badly in need of refurbishment.

On arrival you approach a rather dated reception, where details are taken, language is not a barrier but no help with luggage was offered?

Sadly, the first thing to note is the hotel is not overly disabled friendly, some steps are not accompanied with handrails.  However, the rooms are of a good size with on suite bathroom facilities. 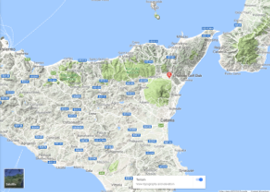 They are clean and the chambermaid service is very good.  Towels and shower gel etc changed every day. The room boasts Sky television and a mini bar.  Only four coat hangers per person encourage you to travel light, but there’s plenty of space for clothing and storage is available.

The restaurant was very spacious but a little dark, the staff were courteous but surely on occasion.

The three-course evening meal costs 29 Euros and was very good, most of the time.  The Saturday evening buffet was superb, only the last night did I feel the food was of a poor standard.  The breakfast layout is bland but of good quality.

The service during breakfast seemed more relaxed.  I fell one evening slipping on a discarded cucumber slice and the staff were very quick to act, cleaning up the debris, but alas did not follow up to ask if this disabled man was injured, so we felt could have been handled better.

The hotel catered for coach parties which stayed one or two nights at the hotel, staff seemed more attentive towards them than the longer staying cliental.

The cocktail bar was run by a very efficient member of staff for most of our stay (7 nights) but when she was not on duty, she was replaced by staff who obviously did not enjoy the role.

The drinks were not cheap at £7 for a G & T, we were never offered a complimentary appetiser even though it was part of our deal?! As far as entertainment goes it karaoke style. 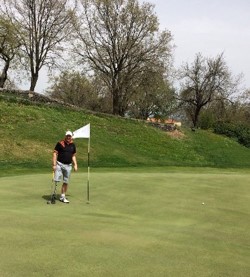 One evening a singer sang along to backing tracks until midnight (about 5 hours), alas she was the only entertainment of the week and whilst it was ok, New York New York wears a bit thin after a while!

The spa was very tranquil and ticked many boxes as to treatments.

The staff there were helpful and made it a very enjoyable experience.  Information on the few trips (3) offered was sparse, no leaflets were offered.  A trip up Etna was offered for £100 but no meal made it seem very expensive.  Getting a taxi return to Taormina was over a £100 it was 30 minutes away.

To be brutally honest, overall, the staff communication was a problem the whole week.

There was a power cut one day, no explanation was offered to the guests and we only got into our room by seeking help from a cleaner?

The resort manager (Guy) did make an effort to discuss how our experience was going, he was very friendly and chatted whenever we saw him (he was English) but surprisingly, no other staff engaged to that level, instead, they saved their conversation for Italian guests 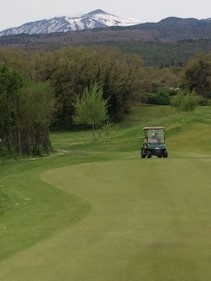 The Clubhouse is situated a few hundred yards from the hotel.  Your round can be booked through the hotel, but buggies have to be paid for at the club. The Pro at the club is friendly and his staff are very helpful.

The office doubles with helicopter rides up Etna, so they are not only focussed with the golfers. A spacious locker room is accompanied by shower facilities.  There are drinks machines for refreshments and confectionary.

There had been a fire in the kitchens, so no other food was available at the golf club which was a little disappointing.

However, the Practise facilities are VERY good, a driving range, practice bunker with plenty of sand in it, a dedicated chipping green and practice putting green.  I was given free practise balls – refreshing as that wouldn’t happen in the UK.

A round of golf is not cheap at 85 Euros buggies are 45 Euros.  The course is nicely set out with some challenging holes but the clover (just off the fairways) is four inches long and thick.

Lost balls are inevitable as the fairways are no more than 20 paces.  I felt this was too penial, looking for balls becomes a bit of a chore when you’ve hit a good shot.

It’s a shame as the course has some dramatic holes, but its let down by unkept rough, clover, daisies and very poor signage. A stroke saver is essential for 5 Euros. The slope index does give the average golfer two shots, but it’s the looking for balls that effects your game. # 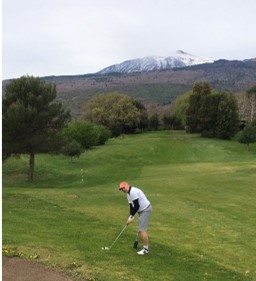 This is a very undulating course so if you’re going to walk be prepared, the temperature can fluctuate 10 or 12 degrees while you are out there. A fair bit of work needs to address these issues to bring the course up to its best.

However, one thing I will always remember is the scenic backdrop, the views of Mount Etna are spectacular…. and would make me return just to view again.

In summary, Il Picciolo Golf Resort could be an exceptional course but it really needs a lot of work on it to get it above a 3 out of 5 rating.

Would I revisit Il Picciolo?  Probably not until I see improvement in the course, its nowhere near the standard of courses for the same money in Spain or Portugal.

I think its pricing its self out of the market of the average golfer if it wants to attract the better player a lot of work needs to be done to compete with the Algarve etc.