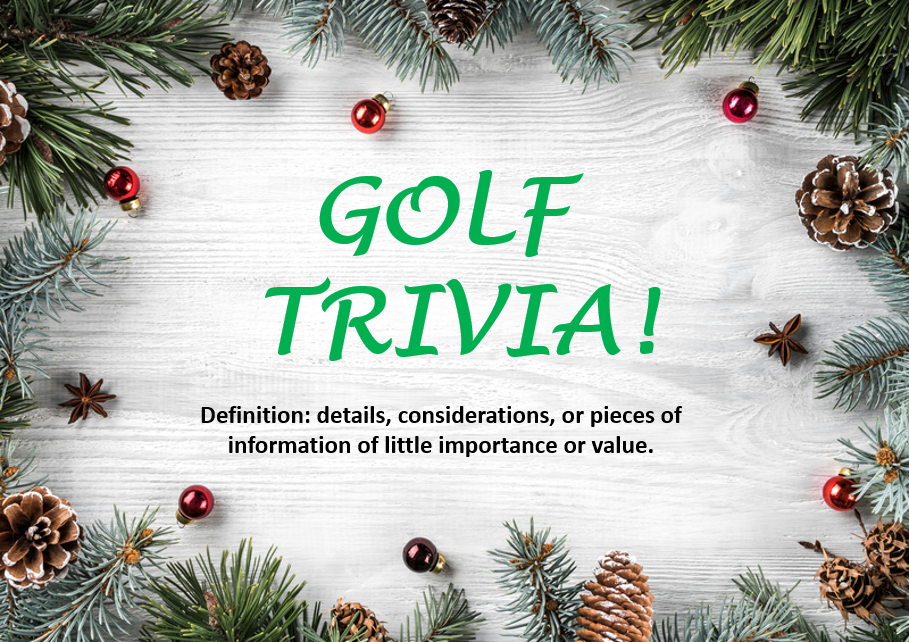 So with the Xmas season upon us, we thought we would give you some golf trivia on which to impress your friends this Christmas!

As such, we turned to regular TSG Newsletter columnist ‘Scottish Bob’ to share with us some great golf trivia nuggets he’s been researching in 2019…

In the few short years that I have been playing golf, and trying to come to terms with my inadequate knowledge of the rules.

I decided to delve a little deeper into how these rules came about.

The Earliest known rules of golf were drafted in Edinburgh in March 1744 for the worlds first “Open “ golf competition at Leith, by the Gentlemen Golfers of Edinburgh.

Who would later go on to become, The Honourable Company of Edinburgh Golfers, the draft consisted of only 13 rules.

For many years there were two sets of rules golf, codified by the U.S.G.A. and the R.&.A., beginning in 1952 the two groups standardized the rules, publishing a new set every two years with minor changes.

However, it was not until 1990 that the two sets of Rules truly became one, as both groups settled upon a standard set of rules for the game of golf.

The biggest difference for many years was that the R.&.A. allowed play with a 1.62 inch diameter ball, while the U.S.G.A ball was standardized at 1.68 inches.

There are 3 basic premises governing the Rule of Golf 1) Play the ball as it lies. 2) Play the course as you find it. 3) If you are unable to do either 1 or 2 ,do what is fair.

Since these set of rules were set over 375 years ago there have been many changes, and today there are 34 rules of golf with many sub-rules, and sub-sub rules, and far to many to mention here today and you can see the original set of rules in the National Library of Scotland. 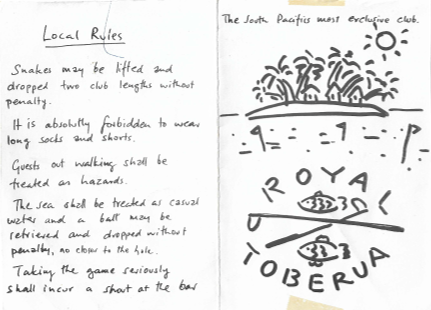 Many of you fellow golfers who are reading this have no doubt played golf in different parts Europe and other part of the world, and may have come across some different rules on your scorecard for that particular golf club and some of them can be quite unique and humorous.

While collecting scorecards for my collection I come across quite a few unique golf courses with some very humorous rules which I would like to share one with you all.

My first golf course Royal Toberua is on the beautiful island of Toberua in the Fijian Islands, it is quoted as the South Pacific’ s most exclusive club.

This 9 hole par 3, beach golf course was founded in 1985 by celebrated Australian artist Ken Done and is only playable at low tide.

I hope that many of you fellow golfers find these local golf rules as amusing as I did.

However, it is a fact is that there are THREE species of sea snakes that are found along the waters of the rugged Fijian coastline

These include the highly venomous black & white banded sea krait.

While their venom is 20 times stronger than any land snake, it is reported that their little mouths are very small and cannot open them very wide.

In addition,  the sea snake is very docile. BUT be careful when & if you decide to pick one up to remove it.

“Til next time Happy Golfing”