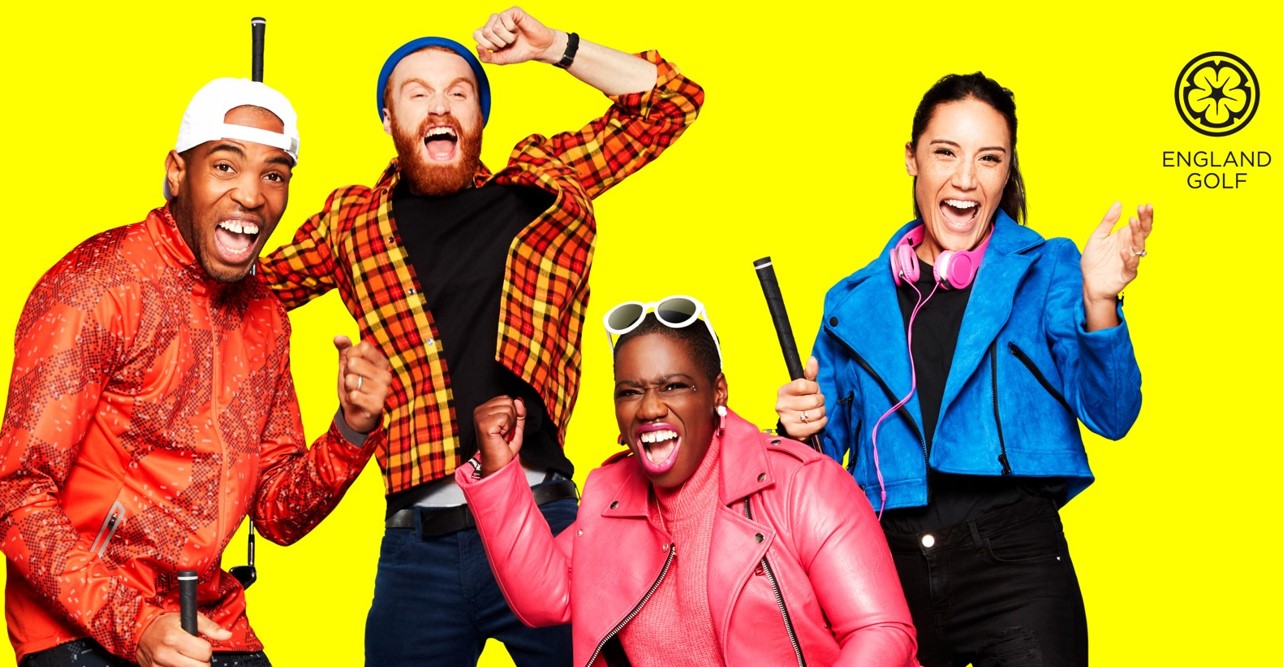 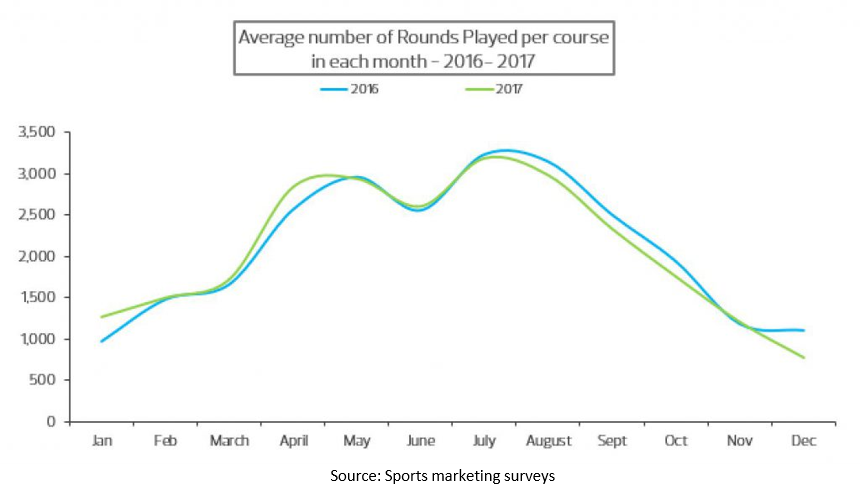 As many people have reported over the last few years, golf in the UK has seen a decline both in rounds played and in membership.

So, is the game in terminal decline or is there a renaissance around the corner?

Here, Ian Mullins (Managing Director of The Social Golfer) gives us his view…

Golf participation has been declining since its last heyday in the 1990s when you couldn’t move for new golf clubs being built at a rapid rate. But let’s look at the stats in the cold light of day.

There are approx. 3.9m* golfers in the UK and approx. 1.3m of those belong to a golf club.

This means 2.6m people that play the game DON’T belong to a golf club.

Meanwhile, according to data from Statista (the statistics portal regarding golf participation in England from 2007 to 2016), the conclusion is that, as of September 2016, approx. 1.1 million adults in England play golf on a monthly basis.

Since 2007, the number of golf players has thus been decreasing from about 1.5m players. This makes a decrease of about 27 per cent over eight years.

The biennial survey (by Sports Marketing Surveys) tries to paint a very positive picture for golf club membership in England, declaring since the 2016 survey, that club membership numbers on average, are up by 24 members.

However, that doesn’t take into account the number of golf clubs that have closed, so it’s hardly a trend. 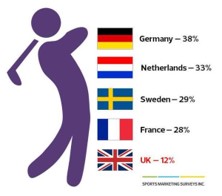 Meanwhile, you don’t need statistics to know many of the golf clubs I know, are empty after 12 noon on a weekend.

And I’m not on my own: www.telegraph.co.uk/golf/2018/09/25/golf-needs-modernised-halt-steady-decline-experts-have-say/

Golf participation in the UK in 2019 – What’s changed?

Well, of course no one can deny that there has been a seismic shift in our lifestyle and habits in the last 20 years.

Life is no longer lived in our local community and people are much keener to venture out and have new experiences.

However, Golf clubs have not only failed to move with the times, but some have even gone backwards.

Coupled with the ‘Global financial meltdown’ in 2008, it has become harder and harder for golfers to justify £1k a year in membership fees and that’s before they’ve even hit a ball.

Furthermore, clubs (and England Golf) have blindly and stubbornly failed to address the sexist and racist attitudes that still exist in many of these white middle-class fiefdoms.

And the professional game hardly covers itself in glory.

Yes, that’s right, despite having a black golfer at the helm of our professional game for over 20 years, how many of you can name another black golfer on the tour?

But where is the BAME (Black, Asian or Minority Ethic) golfer from the UK? Sadly, in this respect, once again our governing bodies have failed us!

Coupled with the fact that in 2018, Georgia Hall won The Open Women’s Championship and yet no one outside of golf in the UK would know who she is.

So, while all other forms of sport have addressed the issues (or at least tried), Golf has at best ignored the change in attitudes.

As such, Golf Clubs are not seen as diverse places. On the contrary, they are deemed as unwelcoming and inaccessible by many.

Then I need to pay every time I play. Yet, I can buy a bike for £500 and be on the road, for free, within a few minutes.

Yet, to compete fairly, the industry says I HAVE to join a ‘bricks & mortar’ golf club to track my handicap.

I presented The Social Golfer concept to a panel of England Golf bigwigs back in 2014.

I am still in disbelief that the response to our innovative approach to making golf accessible was only met with mild interest, not to mention a little arrogance.

Why don’t you have more members I was asked?

“I’m sorry, we’ve just built a platform of 6,500 members (now over 10K) in over 140 countries without any help from anyone and with our own money… I thought we’d done pretty well.”

The response I wanted to give would have been “What the hell have any of you done!”

But experience told me it would not be a professional response, after all, we’re here to make friends not enemies.

Needless to say, I couldn’t wait to leave the room, and, if anything, it made me more determined that we could, and would, do it without them.

So, despite issuing a brief to find commercial partners to help them ‘grow the game’, they finally settled on a partnership with Your Golf Travel.

Surely, they take people AWAY from the UK to play golf, rather than encourage people to take up the game in the UK?

In addition, given this was 2014, I was shocked to be introduced to a self-serving, blazer-wearing, back slapping brigade of executives who, shockingly, even 10 years after the invention of Facebook (now 15 years), couldn’t see the changing world around them. But they are not the only ones…

Oh no, their friends in the marketing department were busy pretending to the world they were forward-thinking when they commissioned a new ad campaign to promote the game aimed almost solely on increasing golf participation in the UK.

Just because you invest in a marketing campaign using diverse characters, doesn’t mean they will be welcomed with open arms.

This message is not effective unless it is backed up by action!

When the lumberjack shirt or pink leather jacket wearing Millennials turn up at a club, he or she is more likely to be sent away with a book of rules on golf attire.

How will this increase Golf participation in the UK?

My point is, the left arm doesn’t know what the right arm is doing – or if it’s even connected to the same body!

Golf participation in the UK in 2019 – The Media

And another thing, (now you’ve got me started), why oh why is golf not being supported by terrestrial TV?

If Tiger Wood’s win at Augusta last weekend told us anything, it’s that golfers, and even non-golfers, will watch if the game is accessible.

So why do they keep doing deals with SKY TV, when they could be promoting golf to the next generation via the BBC or even ITV or Channel Four.

Why is there not even so much as a ‘highlights show’ of the European Tour on a Monday night?

That would keep the game ‘front of mind’ and encourage new audiences to find the game.

I have no doubt that this Easter weekend will see many kids pretending to be Tiger in their back garden, just like I pretended to be Seve in 1978, but I suspect few will make it to a course or range.

Furthermore, I have given up counting the number of times I have contacted a golf club to discuss them hosting one of our Major events (70 people + green fees) and often, I never even get my calls returned.

In short, having spent 25 years in the Advertising and Marketing industry before taking the helm at The Social Golfer, that’s nearly 9 years in the sector, I am still in shock at the lack of professionalism in the golf industry.

Golf participation in the UK in 2019 – What else has changed?

Well, whether the R&A or England Golf acknowledge it or not, the world has moved on around them.

We are now competing for consumers’ time against a whole plethora of other sports and pastimes.

Yes, traditional sports like football and cricket are still played but now there are others, like Basketball, NFL and Gaming (yes, I’m talking Sony Playstations). Then there’s Box Sets, Netflix and Experience days – think Adventure Golf – which is the modern-day equivalent of the Crazy Golf courses I remember from my day trips to the seaside as a kid. As well as online betting, casino websites and other 21st century distractions to amuse us.

I can book a flight to Australia on my smartphone from the comfort of my sofa, yet at some golf clubs, I have to phone the club landline to book a tee time.

In addition, we are now living in the ‘Review Culture’, whereby many will not purchase anything before consulting other people’s views and experiences.

As such, it would seem no one has the expertise to lead golf out of the doldrums, and very few clubs have a clue about marketing.

Ask them what their current R.O.I (Return On Investment) is, or what the value of retweet versus an online banner campaign is and watch the beads of sweat appear on their forehead.

All I hear from golf club managers and industry figures (who should know better) is that it’s all about ‘social media’ these days.

Well, relying on a 22-year old with no experience in media, promotion or PR (except posting stuff on their Instagram feed), does not make them an expert in marketing.

As someone who has spent over £100m for my clients (including Emirates Airlines, the London Golf Show and others), if you think Social Media is the answer to your membership woes – you’re 15 years behind the curve.

I suspect most of them wouldn’t even know what a paid-for campaign on Facebook even looked like!

Golf participation in the UK in 2019 – So what’s the answer?

Firstly, the ‘powers that be’ need to put their egos and job titles to one side and look at the game from the consumers’ point of view.

– They don’t want gimmicks, they want equality and accessibility.

– They should invest in good photography before they invest in a new graduate with plenty of opinions but no experience.

– They need to up their game in terms of customer service.

– The game MUST be on Terrestrial TV, reaching new audiences rather than preaching to the converted.

A link to the club website from a like-minded golf website (a backlink), written in language consumers understand (not just the golf Pros) is much more valuable to your marketing.

And if you think a so-called ‘Social Media Influencer’ wearing ‘Jazzy’ leggings is going to save the game, you are deluded.

Yes, they might encourage a few, but it’s hardly a game changer.

Sadly, it seems to me that golf is so desperate that they’ll jump on any bandwagon that comes along, rather than taking a planned and rational approach to growing the game.

In my humble opinion, in the next 20 years, golf will move almost completely away from the membership model and be solely reliant on ‘Pay & Players’. Which is when many golf clubs will be held to ransom by their lack of good course and service reviews.

The industry will become more akin to the restaurant industry too, whereby reviews on Trip Advisor make or break them.

Meanwhile, the clubs that recognise this shift in lifestyles and attitudes will thrive and prosper.

In the meantime, here at The Social Golfer, we will continue to be a challenger to the traditional golf model.

Even if it’s only a small token effort to increase golf participation in the  UK, we’re doing something to provide an innovative and useful platform for golfers to enjoy their sport.

We are democratising the game, and we hope others follow!

The Social Golfer is an Online Golf Club with over 5K golfers in the UK and over 10K worldwide.

The site has over 4K Golf Club and course reviews and over 25K scorecard submissions.