Home Clubs/Courses Golf in The Algarve … 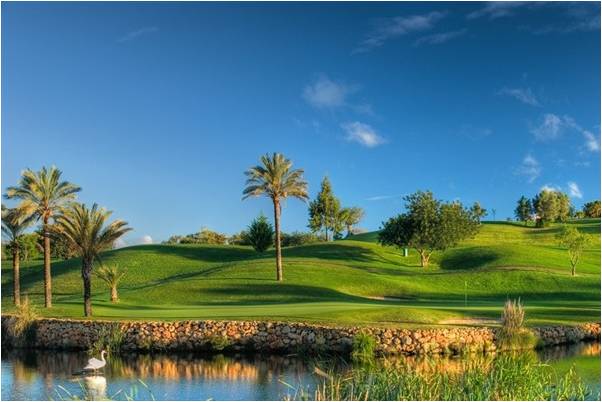 When one dreams of golf in the Algarve, one thinks warm climate, sun-kissed fairways, immaculate greens and a break from the old routine.

On my recent trip to The Algarve, that’s exactly what I got… four days, sixteen guys, four rounds of golf and two designated drivers, what could possibly go wrong!

Golf in the Algarve – The Tour

This trip we ventured west of Faro having booked through Your Golf Travel (although no sign of Darren!), playing at Villa Sol, Vale da Pinta and twice at Gramacho.

We had a very early start on an EasyJet dawn breaker, we picked up the people carriers at the airport and headed straight for our first stop Vila Sol, the home of the Portuguese Open in 1992 and 1993 before heading to Vale da Pinta/Gramacho where we would be based for the next few days.

Having never played golf in Portugal, I was very excited about pitting my wits against some of the more well-known courses in The Algarve and enjoying some winter sun.

And whilst it was only just December, the warm sunshine was balanced well with a cool breeze coming from the north.

Obviously any golf course review is often biased by the way you play on the day, but I have tried to be objective in my observations and put my own playing ability to one side when writing these reviews….

This course is well known to me purely because another TSG member has been a member here for a number of years and spoke highly of it, so I was keen to see it for myself.

The clubhouse on first sight is welcoming although quite difficult to find your way round at first.

The course itself is quite tight but not to the point of distraction or frustration and is set out in two loops of nine returning to the clubhouse.

All the fairways are lined with a combination of pine, almond and fig trees, plants, flowers, lakes and streams – and it makes for a good and pleasant stroll.

However, this course, despite its history is very scruffy in places with unfinished housing, terrible fairway weeds creeping across many of the holes suggesting that it has seen better days.

There is poor signage between holes (very important to the visitor).

The course layout is good and the greens are fair and true but I would be lying if I said it was anything special.

Of course, there are some great holes, most notably the Par threes stood out for me but I am not sure I would describe the place as PGA Tour standard.

In addition, the food served pre round was pretty poor, unless you think a deep fried soggy chicken sandwich is standard Portuguese fare.

All the staff were friendly but I am not sure I will be rushing back anytime soon.

Day two and following a big first night on the local wine, we headed to our second course of the trip.

Now THIS is more like it. What a great course this is!!

And in contrast to the flagship course of the Pestana Group (Vila Sol) this more than lived up to expectation.

This IS why I came to play golf in The Algarve.

Designed by Ronald Fream, Vale da Pinta is considered one of the best layouts in Europe and you can see why.

Vale da Pinta is a parkland course built into the natural contours of the terrain.

After a fairly easy start the course then starts to test you with undulating fairways, plateau greens, stunning views, playing off fairways like carpets. Millionaire golf!

The course has played host to the Seniors Tour in recent years and we were there the day before the regions PGA championship was taking place.

There are two big lakes on the course, which invites you to challenge yourself but I would save my praise for the Par 3 -7th (165 years plateau to plateau) and the stunning approach to the Par 5 – 12th.

Most greens on the course are beautifully guarded with multiple bunkers, but don’t be put off – they are full of soft, fluffy sand.

There are also works under-way around some of the course but all very subtle and it does not detract from the course in any way.

I can honestly say it’s one of the best courses I have had the pleasure of playing (and I have played over 120 in total to date).

The clubhouse is cool and airy and the Pro shop staff welcoming and helpful.

The views from the patio allow you to watch the golfers tee off and play the entire uphill first hole.

However, I have one criticism…. why build a course, so that the last two holes you are playing directly into the sunset?

And why put the 18th green 500m away from the clubhouse leaving a steep walk back, right at the end of your round?!

This is of course nit-picking as most will visit here and take buggies and I would jump at the chance to play here again!

We saved this for the final two days as it was our home and the location for our apartments, meaning it was a short walk to the first tee from here on in.

Gramacho is again a great course again designed by Ronald Fream but with the help of former world no.1 and Open Champion- Nick Price.

The layout is forgiving, open and attractive on the eye.

The fairways are wide (mostly) and rewards the big hitter, as many green are drivable if you take the right line. But don’t be discouraged if you aren’t, good placement will also be rewarded.

After a simple start you are then tested by some undulating holes with neatly placed stone walls and palm-lined fairways.

The course loops away from the clubhouse and only returns back at the 18th.

Again you are met with two main water features with fountains and palm shade but don’t stop to admire the course too much. ou will need to concentrate

You will need to concentrate, to tackle the many sloping greens where a three-putt is common and four putts are not unheard of.

I really liked this course. All the tee boxes were in good condition and despite the finishing holes being in the sunset line (Why?!) I would love to play this again.

If there was one point to note for the greenkeepers – I heard one of our party mention that ever Par 3 was the same distance 150m and they all required playing the same club –  a fair comment, I myself used an eight iron on every one. So perhaps something to consider when laying out the course in future.

So perhaps something to consider when laying out the course in future.

That aside, all the staff were friendly and couldn’t look after you enough and very polite. We were even greeted by owner on 1st tee!

After the golf – The Accommodation…

Pestana have built a great complex at Gramacho and all the apartments were roomy, clean with English TV (if that’s your thing) and come with a good size kitchen and patio.

We also had a full cooked breakfast every day made by our in-house chef, although this is not available to everyone, as he was in our party but he had all he needed to spoil us!

Once we had returned to the room and refreshed ourselves, we headed out to three separate eateries each night:

The final verdict on golfing in The Algarve….

What a fantastic trip. Great golf, great company and great food. I’ll be back soon.