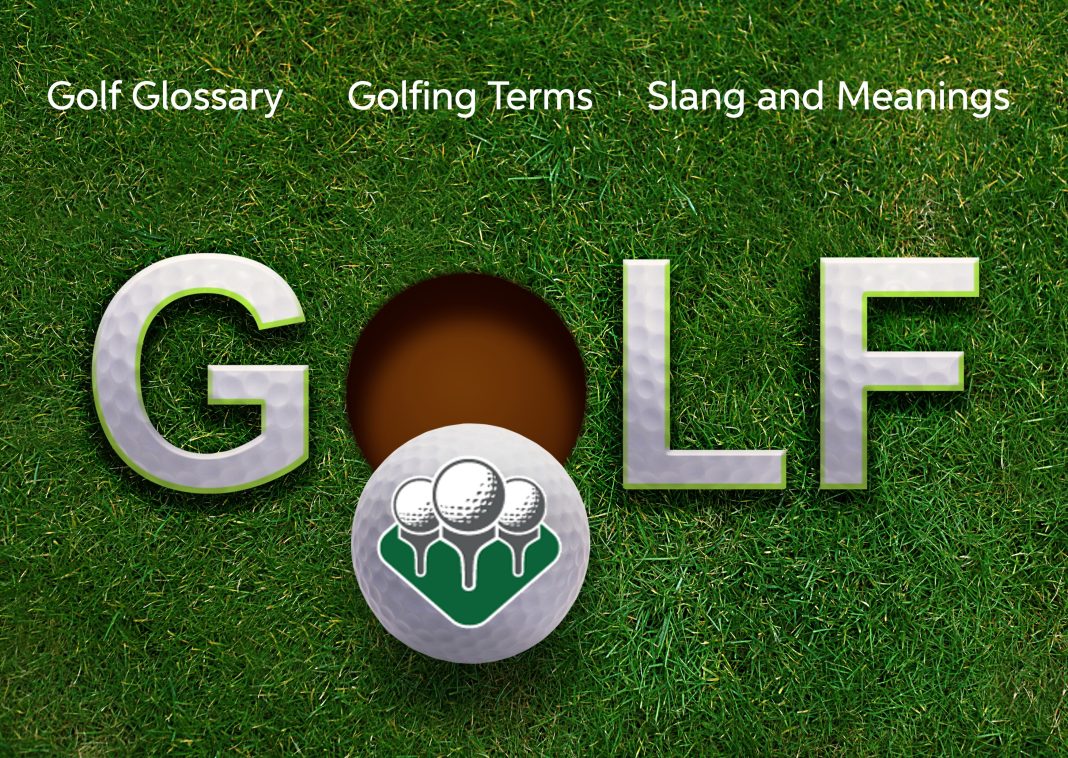 Listed below is an explanation that may help us when playing the game. From Basic Golf Terms to some of the funnier phrases you can hear used on a golf course!

Par: The number of strokes that a golfer should take to complete the hole.

However, there is also ONE Par 7 golf hole in South Korea! This unique 1100-yard hole can be found at Gunsan Country Club.

Golf Handicap Index: A golf handicap is a numerical measure of a golfer’s potential that is used to enable players of varying abilities to compete against one another.

Fairway: The stretch of shorter grass that directs you to the hole and the best place to be.

Semi Rough: The areas of longer grass that line the fairway. Not a bad place to be if you run out of fairway.

Rough: The areas of long grass that line the semi rough. A place where you’ll probably have to take your medicine to get back onto the fairway.

Dogleg: Refers to a bend to the left or the right in fairways.

Green: The smooth grassy area at the end of a golf fairway, containing the hole

Pin or Flag: The object used on the greens to show you where the hole is (and give you hope!).

Tee Box: The designated area that marks the beginning of each hole (It’s where you tee off from).

Starter: The woman or man stationed at the first tee who makes sure you tee off on time.

Marshall: The woman or man who drives around in the cart, monitoring the speed of play. You do not want to be visited by the ranger. That means you are a ‘slowpoke’ which will not win you fans on the golf course.

Caddie: The kind woman or man who carries your clubs during the round.

Divot: The piece of turf you take out of the ground after you hit a golf shot. Golfers MUST replace divots.

Pitch Mark: The indentation left behind after your golf ball lands on the green MUST be repaired to ensure the green recovers.

Bogey: Completing the hole in one more stroke than the par.

Double Bogey: Completing the hole in two more strokes than the par

Triple Bogey: Completing the hole in three more strokes than the par

Birdie: Completing the hole in one less stroke than the par.

Eagle: Completing the hole in two fewer strokes than the par.

Albatross: Completing the hole in three fewer strokes than the par.

Hole-in-One (also known as an ACE): Hitting the ball in the hole on your first shot – the moment a golfer (nor their bar tab) will ever forget. Note: any golfer achieving this feat is expected to buy all golfers of the 19th hole (or what’s otherwise known as the bar) a drink upon finishing the round.

Gimmie: A putt so short that you wouldn’t miss it, so your golf buddies give it to you. The rule of thumb for measuring a gimmie is often the length of the grip of your putter. However, it should only be used in social games or match play scenarios.

Mulligan: An unofficial “redo” or “re-hit” that is undoubtedly a golfer’s best friend and definitely not allowed in competition. It is often used as a way of raising money at a charitable golf day by selling Mulligans – usually 3 for a tenner.

Dormie: In match play, having a lead equal to the number of holes remaining to be played, ie. two up and two to play.

FORE!: What golfers shout when they hit a bad shot to warn other golfers in the area that their ball is heading their way. 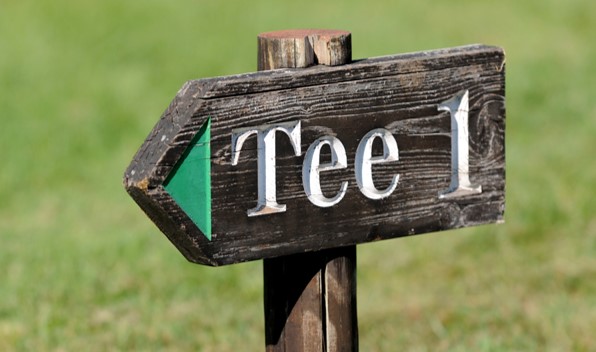 Stroke: What you have when you miss a short putt (just kidding!) A Stroke refers to the act of making a swing.

Draw: A golf shot that moves right to left for right-handed hitters and the opposite way for lefties.

Hook: A golf shot that moves severely right to left for right-handed hitters and the opposite way for lefties (and nothing to do with Peter Pan’s nemesis).

Duck-Hook: A duck-hook is an unpleasant sight if you are the one who struck the ball. However, your playing partners find it hilarious. Your ball leaves the clubface and hooks violently to the left for right-handers.

Pull: For right-handed hitters, it’s when a shot goes immediately to the left after you hit it (opposite direction for lefties).

Fade: A golf shot that moves left to right for right-handed hitters and the opposite way for left, which also is the most common shot shape in golf.

Slice: A golf shot that moves severely left to right for right-handed hitters and the opposite way for left. This happens to be the most common for beginners to golf.

Fat: Taking a little too much turf when hitting a golf shot, catching it heavy as they say.

Top: When you hit the golf ball at the lowest point on the clubface, producing a rolling shot that doesn’t catch much air.

Thin: When you hit the golf ball too low on your clubface.

Shank: Feared by all golfers, this is one of the most dreaded shots in golf. Produced by hitting the ball on the hosel of the club (the hosel is the place on a golf club where the shaft is connected to the clubead).

Break: The movement your golf ball will make on the green after you putt it (or what you will do to your putter after you missed).

Lay Up: Avoiding a risky shot to the green, preferring to take an easier option.

Line: The imaginary path your golf ball will travel along the green, on its way to the hole.

Lie: The way the ball has come to rest on the ground. The ball may have a “good lie” in short grass on the fairway or a “bad lie” in deep grass in the rough. You may have a sidehill lie, where the ball is either above or below the feet.

Scrambling: When a golfer plays several bad shots, yet manages to get a par.

Lag: The term “Lag” denotes the occasion when a player has a very long Putt to the Hole, and is hoping to get the ball within “Tap-In”

Pinseeker: When your golf shot never leaves the pin. 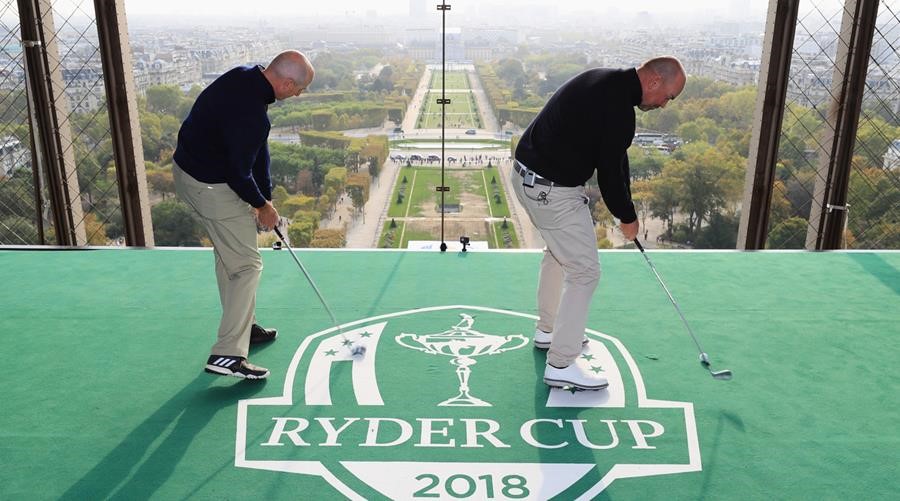 Match Play: Match Play is a form of play where a player (or players) plays directly against an opponent (or opponents) in a head-to-head match.

Stroke Play: A format in golf where players count all their strokes to determine a final score (the common format of professional tournaments).

Foursomes: Groups of two pairs of golfers playing shots alternately with the same ball. The partners drive at alternate holes, so one will drive the even numbers and one the odd numbers. This is one of the formats used in The Ryder Cup

Fourballs: Group of two pairs of golfers recording the better ball score of each pair, based on gross or net scores.

Bogey Play: The format is a ‘Par’ or ‘Bogey’ competition, where players, in essence, play match play against the course. The competition is played hole by hole.

Snowman: When you make an 8 on a hole (because the 8 looks like a snowman, get it?).

Abominable Snowman: A score of 9 (even worse than an 8, see above) on a hole.

Afraid of the Dark: When the ball refuses to go in the hole.

Military Golf: When you go left – right – left down the fairway.

Leather wedge: When a player uses their shoe to improve a lie.

Knee Knocker: A nervous reaction when a player has a short putt after just missing a short one.

Lip Out known as Botox: When the ball looks in the hole but decides to stay out.

A Dead Sheep: When after your putt, you’re still farthest away (Still EWE!)

Barkie: Hitting a tree and still making a par

Fried Egg: A golf ball buried in the bunker.

Yips: A word that should be avoided at all costs! But, if you must talk about it, the yips refer to a sudden loss of fine motor skills that prevents golfers from stroking a putt, hitting a chip shot or even getting off the tee.

Captain Kirk: Your shot went where no ball has gone before.

Laurel and Hardy: When you hit a thin shot and then a fat one.

Saddam Hussein: A Slang term associated with going from bunker to bunker

A Dog License: If winning match play 7 & 6 the result is known as a dog license. In Britain until 1987 dog owners bought a license for each pet that cost 7/6d (37p in today’s money)

Dance floor: Golf Terms relating to “Dance Floor” are commonly referring to the “Green” which has a very smooth surface!

And finally, there is of course, The 19th hole: This is Golf ‘lingo’ for the clubhouse bar where your ’round’ is always to be enjoyed, despite how you’ve played by discussing the ups and downs of the day’s golf with a cold beer.

Possibly the best part of the day for most of us!