I came to the game late in life re-starting after a 12 year sabbatical and post the rather unusual sport of Amputee Football, where’s he going with this I hear you say…well stick around, it’s going to get a lot weirder I can assure you…..

I first came across The Social Golfer when I met Ian (Mr Mullins) at Stoke By Nayland golf Club in Suffolk at a Pro-Am golf tournament that we were both playing in a few years ago.

Anyone who knows Ian won’t be surprised to hear that by the end of the round I had joined the Social Golfer, and in return, I had bent Ian’s ear about the wacky world of Disability Golf.

I made him laugh with a few of my stories and having stayed in touch Ian suggested I write a blog on TSG after a curry one evening, and share with you all a few of my golfing moments.

Golf Addict – I should have said NO…

Some of the names and places have been changed to protect the living; the dead will be rightfully named and shamed.

My first introduction to our wonderful game was through my then brother in law.  I was in my early thirties, Trevor (Clever) was a few years younger …we were both in the Construction business, myself a roofer, Trevor a decorator.

As a young man, my aspirations had been as a cricketer, I even took a job as a Milkman so as to play for Unigate who had a superb cricket team.

My claim to fame is that I faced up to the Wivenhoe Express AKA Neil Foster  England fast bowler and Derek Pringle also a great cricketer … anyhow I digress.

After failing to meet the heady standards set in cricket by Essex in the late 1970’s motorcycles became my only sport of choice until…Clever Trevor remarked at a family occasion that now in our 30’s we should start playing the more sedate game of golf!

It’s probably at this point that I should mention that CT has serious anger management issues.  (i.e TV & DVD player thrown down the garden when his football team lose, type of issues).

The princely sum of £80 secured me a state of the art set of Slazenger XTC irons SW to 3.  Add three ‘prehistoric’ woods and a bull’s eye putter I was fit to go.

Our first few rounds were torrid affairs at Aquatels in Basildon, this was a nine hole course that accompanied a huge fishing lake, the course was permanently water-logged in fact it was golfing’s answer to the Somme battlefield  (to my knowledge the course no longer exists…but the lake is still there).

I’d also been given a golf book by Beverly Lewis that helped me to grasp the fundamentals of the grip and stance.

After a few sterling efforts hacking around in the mud at Aquatels after Sunday lunch TC and I agreed we needed a more upmarket challenge. 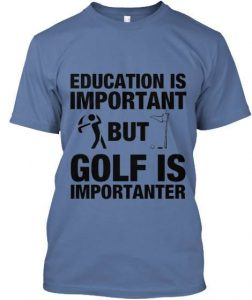 Golf Addict – Getting a taste for it…

So, after more talk, we upgraded to Belfairs Park, still a municipal course but well established and regarded by all a proper golf course. To give you a clue to when this was… Greg Norman was ‘the man’ at this time, having won the open that year (he had also just launched the Tiger Shark brand).

On arrival at Belfair’s CT not only was kitted out head to foot in Greg Norman apparel, including white pressed slacks, he had also purchased the Tiger Shark (no slice) driver for the best part of a home mortgage deposit.

Belfair’s was to be the ‘Tiger Sharks’ inaugural outing.

CT looked magnificent on the Tee, swathed in his newly purchased attire, his white shoes blanched to the condition of a sailor’s cap on the Royal yacht.

Out came the Titleist Balata Tour golf ball, (the Balata golf ball was the Pro V1 of the day, hideously expensive its life span was 3 holes if you were lucky!)

CT recoiled the Tiger Shark with an over-swing that John Daly would have been proud of.

The impact of clubhead and ball was like the crack of a lap-dancers garter.  CT’s follow through left him completely off balance, he lurching sideways almost doing a complete pirouette.

The ball launched into the air at such a rate it was hard to focus on its trajectory, I glimpsed it just as it veered sharp right and then we heard the unerring sound of a golf ball striking a very solid piece of wood.

Belfair’s has a ‘Cathedral like effect’ on sound, voices and golf ball connections are somehow amplified to a much greater degree than normal, it’s the trees of course and CT had hit a big one.

CT looked at me for hopeful assurance that his ball was safely in play, not wanting to encourage any false hope; I just mumbled something about ‘not being sure’ and probably best you take another one.

Somehow composing himself CT delved into his bag a produced another immaculate Balata, straightening his White Shark cap, placed his provisional ammunition on a tee peg…a slight waggle at address and then back came the gleaming silver no slice club.

CT’s neck muscles stood out like huge tree roots his face reddened from the disappointment of his first attempt.

Boom the metal headed club thundered into the small white object, the Balata soared into the sky almost leaving a vapour trail, CT’s finish was even less controlled than before completely losing his balance as the expensive driver slipped from his grasp.

The Balata was almost out of sight when it veered sharp left and ricocheted off what sounded like three maybe four trees.

By this time a small gathering had approached the first tee, CT gathered himself enough to utter those famous golfing word’s ‘That will be OK’? I managed to duff a drive 100-yards down the fairway, we were off.

During the round though there was some collateral damage.  The ‘no slice’ driver was hurled into oblivion on numerous occasions I retrieved it twice but the third time I think it stayed up in a tree 60 or so feet up.

The putter CT had so lovely admired just a few hours earlier on the practice putting green, received the snapping across the knee treatment.

A dozen Balata balls disappeared over the first 9 holes; my ‘Ultra’s’ were also diminishing fast. We managed to make it round and into the 19th hole.

The language had been pretty fruity at times and CT’s perfect attire now adorned the battle stains of too many visits into the rough. 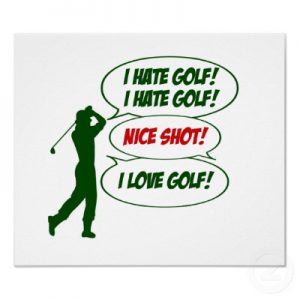 Golf Addict – I can take it or leave it (honestly)…

CT and I shared a few more rounds but I never really got the bug for this game, golf with CT was like being in with the opposing supporters at a football match, you just never knew when it would kick off.

I put my clubs at the back of the garage; they did not see the light of day again for a dozen years or so until I was badgered into giving this wonderful game another try, more on that next time.

Through the grapevine, I hear that CT still plays this beautiful game maybe our paths will cross again someday?

I often smile when I see a guy on the tee kitted out in the latest Calvin Green fashion with the latest driver in hand and brand spanking new Pro V1 perched on the tee, in my head I hear a voice saying go on CT smash it down the middle!

Next month, I’ll tell you how this innocent start to my golfing career became an obsession….

Paul Houghton is a member of The Social Golfer and at Riverhall Hall Golf Centre where he plays off 17.