Following on from Scottish Bob’s blog series on the Oldest Golf Courses of the World by continent in 2017, Bob now turns his attention to some of the lesser known courses around the world, this time its the turn of Christmas Island, Australia (Indian Ocean)…

We have all heard the saying “All your Christmas’s come at once” but this can be true while playing golf on Australia’s most northern golf course!

Golf on Christmas Island golf is amazing, the course sits on top a volcanic seamount, pushed up by the volcanic eruptions many millions of years ago.

It is a 18 hole par 64 layout, with fully grassed fairways & greens and it is set on an eastern, gently sloping plateau.

The course is bordered by the Indian Ocean on the east and tropical rainforest jungle to the west.

The golf course was first established by Mr Jack Pettigrew in 1955, who many years earlier had cleared the area while being held prisoner by the invading Japanese forces.

The club is run entirely by volunteers and the course ideally located to catch the south-east trade winds. 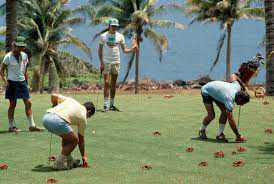 If this rule is disobeyed the offending male/female will have to pay for the drinks.

While playing your round of golf, the flora & fauna will amaze you, as will the abundance of Frigate birds & Fruit bats and ‘Abbotts Booby’s’ nesting in the tall trees nearby. NO, it’s not what you are thinking, these are real birds.

However, at certain times of the year, you will come across the “infamous Red Crabs” or the largest land crab, “The Robber Crab”. This unique and endemic species has resulted in local rule concerning the crabs “pinching your balls”.

And at times, the golf course can be a sea of red, with tens of thousands of crabs making their way to the Ocean. During the months of November through to early January, the red crabs migrate from the jungle to the ocean to mate and spawn their eggs.

Breeding is usually synchronized island wide and it is estimated that there are around 40-50 million crabs around the island in total.

No, you can’t have “Chilli Mud Crab” as you can’t eat them, there are a further 14 different species of crabs on the island.

Captain William Mynors of the Royal Mary (a shipping Vessel which was owned by The East India Company) named the island when his ship passed it on Christmas Day 1643. So now you know!