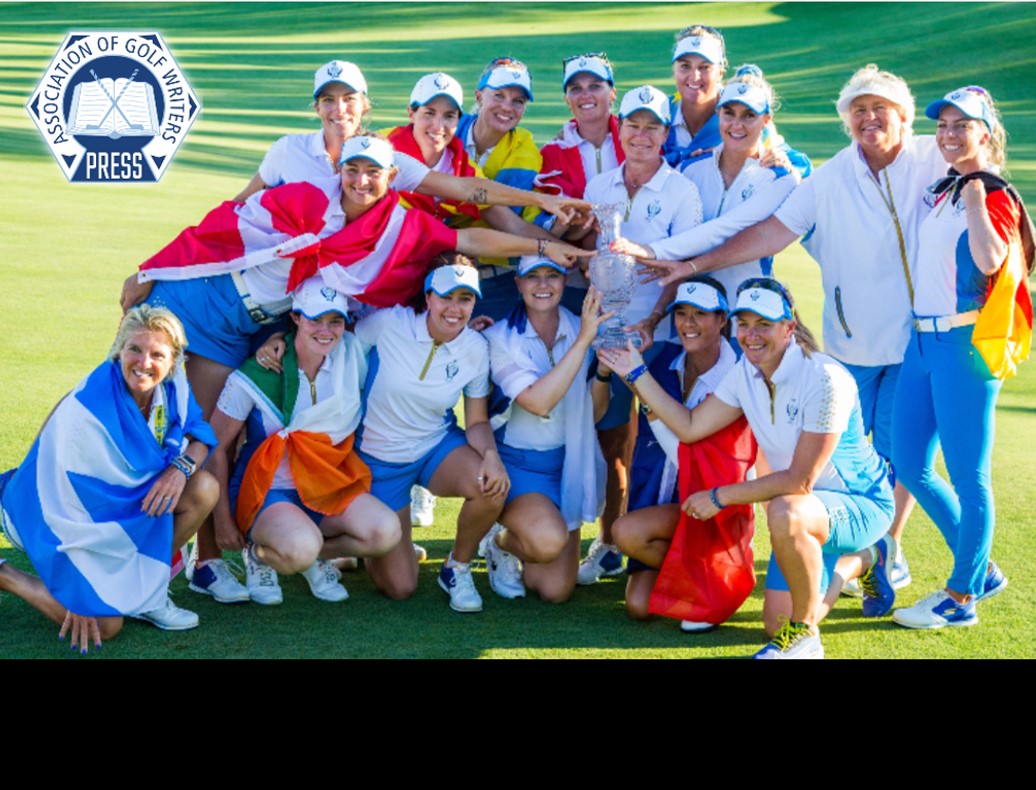 Association of Golf Writers Trophy won for only the second time

The Association of Golf Writers (AGW) is pleased to announce the victorious European Solheim Cup team has been voted by members as the recipient of the 2021 AGW Golf Writers Trophy.

Captained by Scotland’s Catriona Matthew OBE, the team became only the second European side to win on US soil in the biennial event, defeating the USA 15-13 in a thrilling match at the Inverness Club in Toledo, Ohio.

The triumph saw Matthew, who had already led the side to a dramatic victory two years earlier on home soil at Gleneagles, become the first European captain to win the contest back-to-back. This success was secured despite few European fans being in attendance due to Covid-19 restrictions, meaning the visiting players faced a vociferous US support.

The victorious European side, and on the 70th anniversary of the first AGW Golf Writers Trophy award, secured nearly 50 per cent of the members votes in the annual poll over Jon Rahm and Richard Bland.

Helped by his major breakthrough in the US Open at Torrey Pines, Spaniard Rahm became World No. 1 for the first time while Englishman Bland secured his first European Tour victory at the 478th attempt amid emotional scenes at the Betfred British Masters.

Association of Golf Writers Trophy - What they said...

It is only the second time a European Solheim Cup team has been awarded the coveted Association of Golf Writers Trophy, the first being in 1992 for the side’s success at Dalmahoy.

Lewine Mair, the first female and current President of the AGW, said:

“Huge congratulations to Catriona Matthew and her team for winning our award. I was at the first Solheim Cup at Lake Nona in 1990. The home side won by 11 1/2 – 4 1/2 and I remember everyone (other than the Europeans) saying that it would be years before we could pose a real threat to the vastly more experienced Americans. As it was, we won in 1992 – and have gone on to win four out of the last six matches to draw closer to the Americans who currently lead the series 10 – 7.  I think that most people would agree that the Solheim Cup has been one of the finest additions to the golfing calendar.”

“Catriona Matthew and her players overcame the odds in more ways than one to win this year’s Solheim Cup. Not only did they achieve a feat that had been accomplished only once before on US soil but they did so in an environment that massively favoured Pat Hurst’s home team. It is pleasing that this has been reflected in our vote despite facing stiff competition from Jon Rahm, in particular, but also Richard Bland.”

The announcement was also warmly welcomed by both Matthew and Ladies European Tour CEO Alexandra Armas.

In responding to their success...

Matthew said:“It is an amazing honour for the Solheim Cup team to win the Golf Writers’ Trophy. It was a great victory and it’s pleasing for it to be recognised by AGW members. To win it over Jon Rahm winning the US Open and getting to world No 1 and also over Richard Bland’s great story of winning on the European Tour for the first time in his 478th start is really nice.  In fact, there were a lot of good stories in golf this year, so this really is a special honour for the team.”

Armas said: “A huge thank you to the members of the AGW for voting for the 2021 European Solheim Cup team as the recipient of the prestigious Golf Writers Trophy. Following on from success at Gleneagles two years ago, our outstanding captain, Catriona Matthew OBE, led her team to victory once again at Inverness Club in Toledo in September and the side made history by winning for only the second time in the United States. It was an incredibly tight competition, which was reflected by how many of the matches went down the 18th hole. We are extremely proud of our very worthy team and thank the AGW once again for recognising and celebrating their phenomenal achievement this year.”

The trophy will be presented at the AGWs annual dinner, to be held next July in St Andrews during the 150th Open Championship.