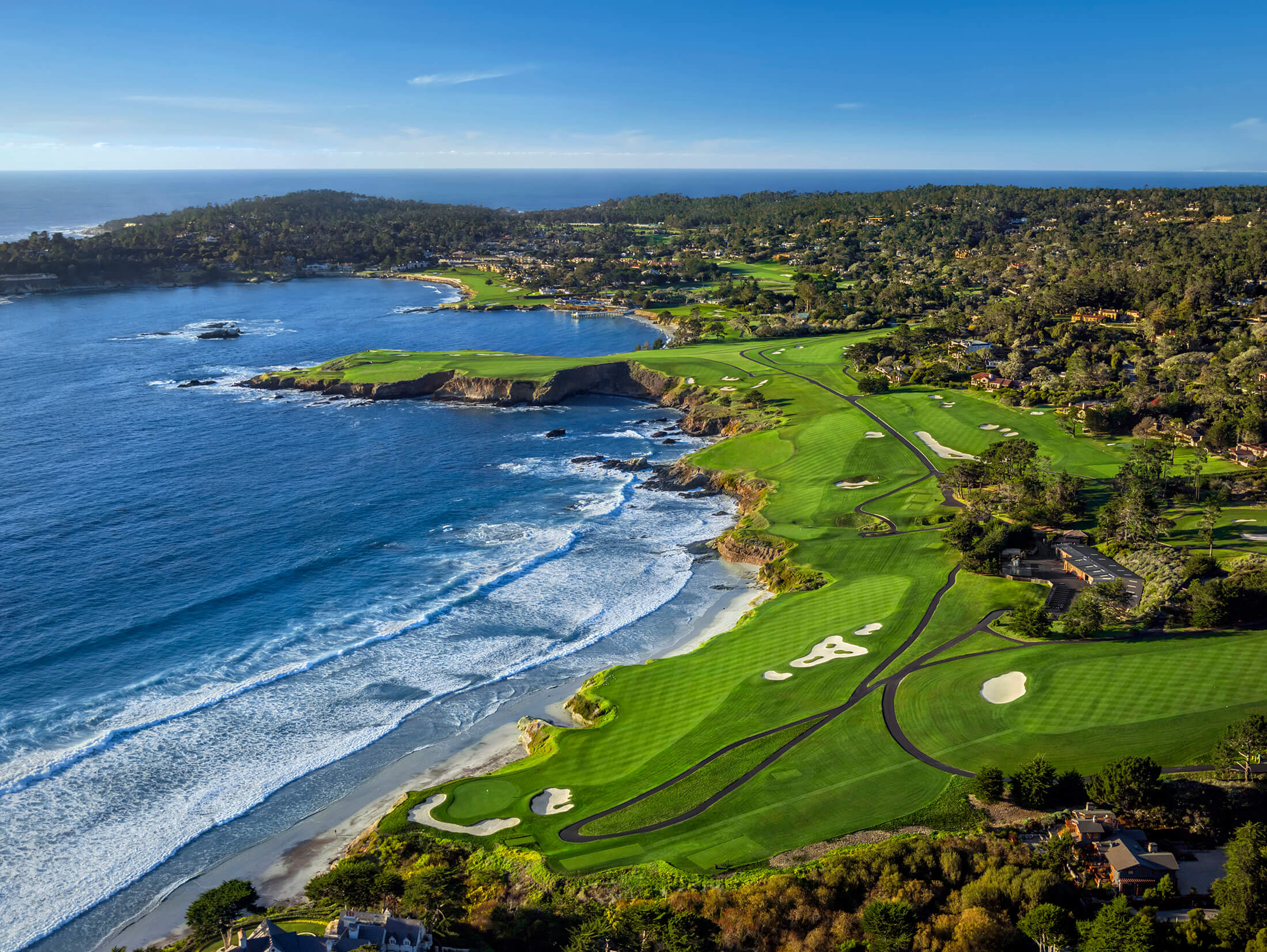 Today the third of 2019’s Golf’s major begins, with this year seeing the tournament return to Pebble Beach Golf Club for the first time since 2010.

Back then Tiger was about to enter the wilderness and it was Graeme McDowell who ended the week victorious!

However, let us take a closer look at the club and the course!

Universally heralded as one of the finest and premier Public Course in the US.

Pebble Beach has hosted the US Open event on five previous occasions.

However, here’s what the Pebble Beach Golf Club website said about its own history…

February 1919 – In the early part of the 20th century, Samuel F.B. Morse is challenged with making the Pebble Beach area an attractive real estate investment in order to find a buyer.

He decides to create a one-of-a-kind golf course with unsurpassed beauty and an element of difficulty that will always be challenging.

December 1926 – Del Monte hosts the 1926 Monterey Peninsula Open on Pebble Beach Golf Links, putting up a $5,000 purse and attracting most of the top golfers—professionals and amateurs (However, we’re not sure if there were any high handicappers involved!)

Harry “Light Horse” Cooper of Texas wins with a 72-hole score of 293, five over par.

Minnesota’s Jimmy Johnston beats the field with a 4 & 3 win in the final 36-hole match against Oscar Willing.

August 1935 – In the heart of the Depression, Pebble Beach Golf Club hosts the California State Open after a long hiatus.

September 1940 – The USGA returns to Pebble Beach for the 1940 U.S. Women’s Amateur, which is won by defending champion Betty Jameson.

Men’s Amateur for Pebble Beach Golf Links, but it was cancelled due to World War II.

January 1947 – The Bing Crosby National Pro-Am golf tournament is played for the first time at Pebble Beach (after being played for six years at Rancho Santa Fe before World War II).

September 1947 – The U.S. Amateur returns to Pebble Beach and is won by Skee Riegel.

September 1948 – The U.S. Women’s Amateur returns to Pebble Beach. It is won by Grace Lenczyk.

April 1950 – Among the first of the tournaments of the newly formed LPGA is the Weathervane Transcontinental Women’s Open, which is won by Babe Zaharias at Pebble Beach in 1950. 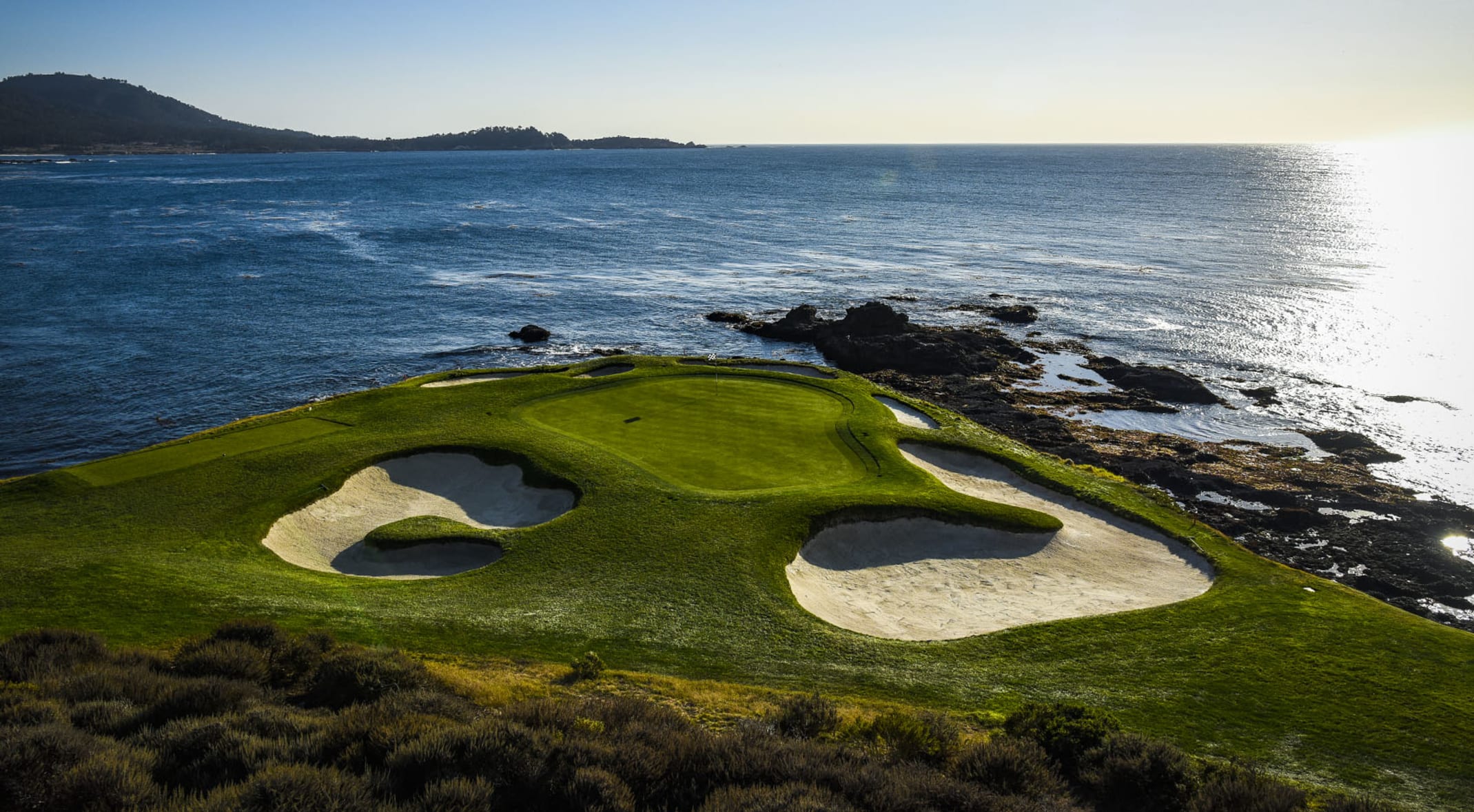 Bing Crosby hosts the broadcast of the final round live from the 18th green.

September 1961 – Pebble Beach again hosts the U.S. Amateur, attracting one of the top international showings to date, as it follows just weeks after the Walker Cup is held in Seattle.

After defeating Johnny Miller in the 1972 Crosby, Jack Nicklaus returns to Pebble Beach and wins the U.S.

June 1982 – The U.S. Open is held at Pebble Beach Golf Links for the second time.

It features the battle between Tom Watson and Jack Nicklaus and the most talked about shot in golf.

To accomplish his mission, he sinks his legendary chip shot. He also birdies 18 and defeats Nicklaus by two strokes with a 6-under par 282.

A rain-delayed final round ends with Curtis Strange and Tom Kite tied; Strange wins on the second playoff hole and becomes the first golfer to win more than $1,000,000 (lifetime) on the PGA Tour.

Under brutal winds, Tom Kite shoots an incredible par round and wins his first major with a 3-under 285.

August 1999 – The 99th U.S. Amateur Championship becomes the ninth USGA championship held on Pebble Beach Golf Links and the first to also use Spyglass Hill for the medal-qualifying rounds.

Tiger Woods captures the trophy, besting his nearest competitor by 15 strokes and tying the lowest 72-hole score ever in the national championship.

July 2001 – Golf Digest ranks Pebble Beach Golf Links as the No. 1 Golf Course in America—the first time a public course has been so honoured.

Furthermore, a number of course enhancements—all under the direction of legendary Arnold Palmer—are completed to strengthen player appreciation, heighten the challenge and exceed guest and championship expectations.

In a championship where a score of par is the most meaningful, the then 30-year-old McDowell posts an even-par 284 for the 72 holes.

He becomes the first European winner since England’s Tony Jacklin in 1970.

Regardless of who comes out top this weekend, you can be sure Pebble Beach Golf Club will continue to be at the forefront of world golf with future events including a first U.S. Women’s Open in 2023.

Furthermore, every February, the PGA Tour visits for the AT&T Pebble Beach Pro-Am, a tradition that began in 1947.

Pebble Beach Golf Club US Open – Who’s your money on…

As with previous TSG articles on Golf’s majors, it’s always good to see who the favourites are and this year we have Tiger back in the mix!

Whilst his odds are much improved since his win at The Masters and given he has won here before, it could be argued he should be the favourite.

However, the betting at the time of going to press is as follows…

Obviously, these odds are pre-tournament but there are many providers of live betting odds too, just search Google.

In the meantime, we look forward to watching the field compete on some of the best greens in the world!