In the fourth in our series of articles on golf’s Major events, this time we turn our attention to the second oldest event in the golfing diary – The PGA Championship!

The Majors – The PGA Championship… 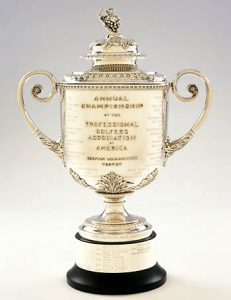 The national championships for amateur golfers, held at Newport Country Club in Rhode Island with another at St. Andrew’s Golf Club in New York.

In addition, and at the same time as the amateur event, St. Andrew’s conducted an Open championship for professional golfers.

After the formation of the USGA, golf quickly became a popular sport across the country.

In February 1916 the Professional Golfers Association of America (PGA) was established in New York City.

The organisation’s first president was Robert White, one of Wykagyl’s best-known golf professionals.

The first PGA Championship was held in October 1916 at Siwanoy Country Club in Bronxville, New York.

Originally played in MatchPlay Format but was changed to a Strokeplay event in 1958.

Moving to the present day, the 2016 winner, Jimmy Walker received $1.8 million and was presented with the now famous Wanamaker Trophy.

The benefit of winning The PGA Championship means you are automatically invited to play in the other three majors (Masters Tournament, U.S. Open, and The Open Championship) for the next five years.

They are also exempt from qualifying for The PGA Championship for life.

In addition, the winner receives membership on the PGA and European Tours for the following five seasons and invitations to The Players Championship (Played in May) for five years.

However, as the Pro golf calendar gets more and more congested, there is now talk of this event moving to May, with the Players Championship moving back to March to make way.

The idea here is that this leaves more room for the FedEx Cup and more space between this and The Ryder Cup at the end of Sept.

The Majors – Player Qualifications for The PGA Championship 2017…

There are different routes that players can take to qualify for The PGA Championship – Qualification routes as of 2010:

– Winners of the last five US Opens

– Winners of the last five US Masters

– The low 15 scorers and ties in the previous PGA Championship

– The 20 low scorers in the last PGA Professional National Championship

– The 70 leaders in official money standings on the PGA Tour. 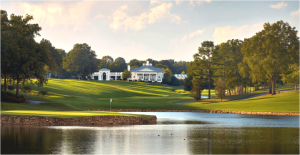 The 58th PGA Championship will take place at Quail Hollow on the East Coast in Charlotte, North Carolina.

The course was originally designed by famed golf course architect George Cobb in 1961 to capture the beauty as well as the challenging terrain of the Piedmont region.

It is considered by some to be one of the finest courses in the southeastern United States.

In the intervening years, the course has undergone a series of improvements, including modifications to several holes by Arnold Palmer in 1986, and a redesign by Tom Fazio in 1997.

The signature hole at Quail Hollow is the par four, 14th is a dog-leg left that can be driven with a good tee shot.

It measures 346 yards from the championship tees.

A 15-acre lake frames the left side of the hole and the rough on that side slopes down to the water.

The narrow landing area measures about 27 yards across and is guarded with two bunkers on each side.

The two-tiered green is long and narrow with about 7,100 square feet of putting surface.

Two more bunkers guard the left front and middle of the green, and a collection area waits just off the right front of the green for short approach shots hit offline or almost perfect drives.

The area immediately left of the green slopes severely down to the lake, so shots hit left have a very good chance of ending up in the hazard.

This Major event tends to throw up some unexpected winners with only Tiger Woods and Rory McIlroy being double winners in the last 20 years, so predicting who may be this year’s winner is no less difficult.

With 156 golfers in the mix, it’s its anybody’s guess.

Some information on key players at the 2017 US Open is listed below…. 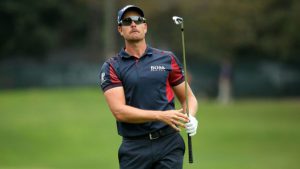 He was the first Swedish major champion winning the 2016 Open Championship at Royal Troon with a record score of 264.

A two-time European Tour Golfer of the Year he has spent 250+ weeks ranked in the OWGR top ten.

Dustin Johnson is currently still standing at No.1 in the World Rankings, so cannot be dismissed.

OK, so not a great showing at the recent US OPEN, missing the cut but somethings tells us that Johnson is going anywhere anytime soon.

He is a four-time PGA Tour winner and an eight-time Japan Golf Tour winner.

On 19 June 2017, Matsuyama became the world No. 2-ranked player on the Official World Golf Ranking after his runner-up finish at the 2017 U.S. Open.

This English golfer is still learning his craft. Hailing from North London has made many friends on tour in the last 12 months and whilst he only has one win on the European Tour, which came at the 2016 Open de España, this could be his kind of course.

Known affectionately as ‘Beef’ since his youth, he has carried the nickname into his professional career and is very popular with the US galleries.

But of course, any player could win the Wanamaker trophy!

The Majors – Betting at The PGA Championship…

Having a flutter on Major golfing events is now commonplace for golf lovers and armchair sports fans.

Many Betting firms have developed their product offering, making it very simple and quick to lay a wager.

With websites, apps and multiple bets options now available, billions of £’s and $’s are spent each year on adding another dimension to the sport.

Of course, the odds on this event will swing massively between now and tee-off but here are some of the latest betting odds (26/7/17)…

There are rank outsiders too and in the past, we have sometimes chosen outsiders using an Each-Way bet. This year, these include Danny Willet 80/1,  Matthew Fitzpatrick 100/1, Ross Fisher 150/1 and John Daly 500/1

So as 7th August approaches, keep an eye on the odds as they change. However, please bet responsibly.

We will definitely be enjoying this year’s event for the comfort of an armchair!

For previous articles on golf’s four Majors, click on the links below:

The Majors Part 2 – The US Masters…