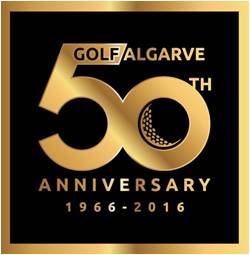 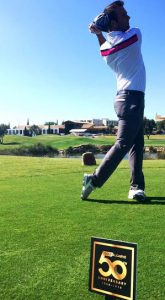 The Algarve – Europe’s number one golf destination – has reported a record-breaking start to its golden year of golf, marking 50 years of golfing in the Algarve, since the birth of the game in the sunshine region.

It’s hard to imagine the Algarve without thinking of golf, yet golf wasn’t born on this sunshine coastal area until 1966 when Henry Cotton first laid out the Championship course at Penina.

Fast-forward half a century and our alluring region has not only become one of Europe’s premier holiday spots, but also an award-winning golf destination.

With a staggering 40+ courses/layouts that can be played all-year-round, it’s no wonder the Algarve draws hundreds of thousands of golfers to its fairways each year.

The Algarve is the southernmost region of mainland Portugal, and more than half of its courses decorate the 150-mile coastline, which also boasts spectacular beaches, picturesque rocky coves, quaint fishing villages and a rich cultural heritage.

Golfing in the Algarve turns 50 – The stats…

The southern Portuguese coastline boasts 43 fabulous courses and fresh from celebrating its record year in 2015 when more than 1.2m rounds were played.

However, there was more good news with the release of results for the first four months of 2016 showing a huge increase of 17 per cent.

Figures for January to April showed more than 458,000 rounds of golf played – a staggering 68,000 more than the same period last year.

In real terms, that is more than 563 extra rounds played per day, as golfers flocked to the fairways.

Golf in the Algarve turns 50 – what they said…

Maria Manuel Delgado e Silva, ATA golf product manager, said: “What an amazing start to our landmark year for golf! As they say with a good wine or cheese – one gets better with age – and these results give us confidence that the Algarve continues to grow in popularity, attracting golfers from around the world”

“It has been a fantastic team effort from the thousands of people who work so hard and have shown such dedication throughout the Algarve’s golf industry.

“We believe we provide the best blend of golf, accommodation and hospitality, combined with climate, access and value for everyone.”

He added, “We would like to thank all golfers who have already visited and we are ready to extend a warm welcome to many more guests as our golden year continues.”

It’s a significant milestone for the region and it’s also fitting that the cream of European golf will be welcomed in October for the 10th edition of the Portugal Masters.

Thinking of golfing in the Algarve? Portugal is the perfect destination for golfers of all ages and abilities, with something to suit every taste and budget.

Associação Turismo do Algarve (Algarve Tourism Association) is the official entity, appointed by the Portuguese Tourism Board, responsible for defining strategies and to promote golfing in the Algarve abroad.

ATA is a non-profitable association, a joint-venture between the public and private sector.