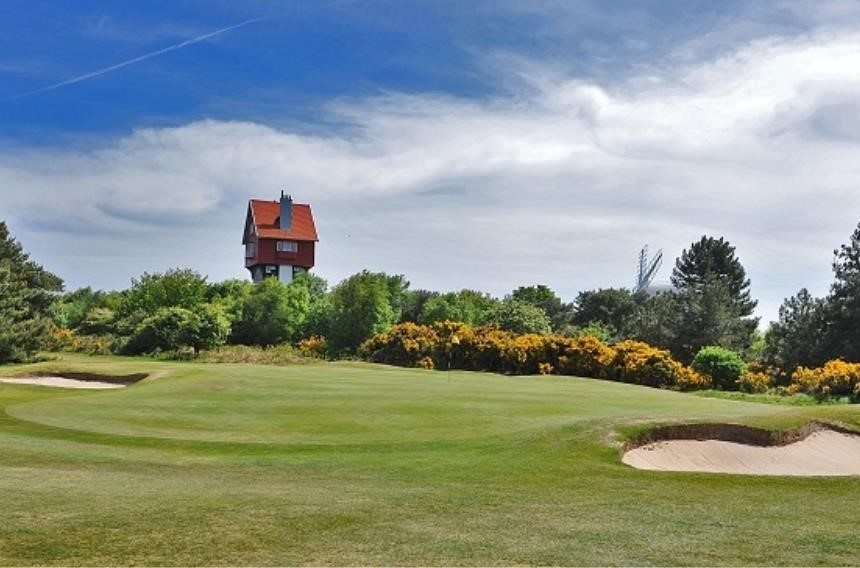 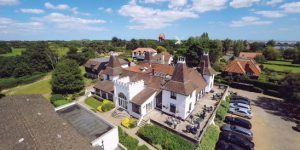 Thorpeness Golf Club is set on the Suffolk coast, a few miles south of Southwold and is most famous for its unique landmark, the ‘House in the Clouds’. Located just off the A12, it is within easy reach of Ipswich and Lowestoft.

We sent TSG course reviewer Ian Mullins to check out the course and share with his fellow TSGers, his view on the set-up.

The entrance to Thorpeness Golf Club & Hotel is welcoming, and the long drive up to the main hotel gives you a real sense of anticipation that you are about to have a good day.

The Clubhouse and hotel are combined, meaning that you are likely to encounter walkers, runners, cyclists, as well as those that favour the little white ball.

However, whilst the hotel is modern, light and airy (as you would expect) once you enter the bar area you get a sense of the club’s history.

The idea for the golf club was first conceived in 1910 by the Scottish Barrister Stuart Ogilvie but the first world war postponed the building of the course until James Braid was invited to design the layout in 1922.

Widely accepted as one of the great golf course architects, he went on to design over 200 golf courses in the UK.

Some of the trophies on display in the bar area are the oldest in British golf club history, including the ‘Silver Frigate’, a replica ship cast in the purest silver.

The Pro-shop is situated by the putting green and we were welcomed with a big smile (some clubs could learn from this!) from Senior Club Professional Christine Langford. 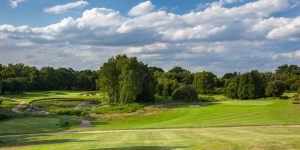 Christine is from good pedigree, having turned professional in 1976 to pursue a career as a tournament player. She was one of the first players to qualify to play on the US LPGA Tour, and she is a founder member of the Ladies European Tour where she won 5 tournaments.

With over 40 years working in her sport, Christine has been recognised by the PGA twice. Once by being awarded Advanced Fellow status and earlier this year she was made an Honorary Life Member of the Association.

Membership starts from as little as £51.50 a year for juniors, with Adult membership around the £1200 mark. Special concessions are in place for Seniors over 80 too.

Thorpeness is not the cheapest course to play for visitors BUT it is good value.

Rates for 18 holes is £60 before 12pm, £40 after 12pm with twilight rates also available.  The Shop is stocked with all the usual bits and pieces and their embroidered club wear is very smart.

All the staff were friendly and very laid back (we are in Suffolk) and whilst I do object to being asked to pay £14 for breakfast (in the main hotel), a simple bacon roll can be bought at the bar for much much less.

Thorpeness Golf Club – The ‘House in the Clouds’.

Arguably, Thorpeness Golf club is most well-known for its quirky landmark – The House in the Clouds. 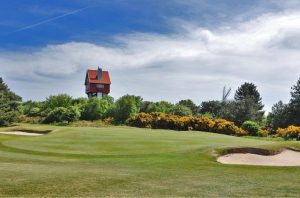 Originally a water tower, it was built in 1923 to receive water pumped from Thorpeness Windmill and was designed to improve the looks of the water tower, disguising its tank with the appearance of a weatherboarded building more in keeping with Thorpeness’s mock-Tudor and Jacobean style village.

The original capacity of the water tank was 50,000 imperial gallons (230,000 l) but during the Second World War, the House in the Clouds was hit by gunfire from anti-aircraft guns based at Thorpeness.

In 1977 the water tower was made redundant by a mains water supply to the village, and additional living space was created. In 1979 the main water tank was removed to fully convert the building into a house.

The building currently has five bedrooms and three bathrooms; it contains a total of 85 steps from top to bottom and is around 70 ft high and can be rented out by anyone.

As mentioned above, designed and built by James Braid, the course is an interesting mix of heathland, linkland, parkland and woodland.

Oh yes, and its narrow! I was warned before teeing off (on an immaculately presented first tee box) I would lose golf balls at this course and with my game, I didn’t disappoint them.

However, don’t be afraid – if you play this course conservatively and straight, it can be beaten.

The course is 6,421 yards but feels much less as most holes are on flat ground but watch out for the bunkers, they are all perfectly placed to catch your ball.

I played here at the height of the dry summer of 2018, so we got plenty of ‘run’ but I suspect the course can turn on you in Winter.

All the Greens were what you would expect from a Top 100 golf course (no.83) and with every hole presenting a different challenge from the last, it requires playing a few times before you will score well.

However, golf isn’t supposed to be easy and there is a real sense of authenticity to this layout.

The stand-out holes as I recall: 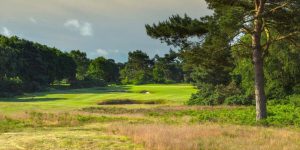 All in all, Thorpeness Golf Club is a pretty and welcoming club and course and is a delight to play.

I would highly recommend this course to any local people, or those from further afield (like in my case, the neighbouring county of Essex).

A pretty course full of fauna and mature parkland and I can’t think of anything to criticise.

Christine explained that they were very keen on providing golf and hotel packages for all standards of player, whilst also catering to Mixed Couples, Women’s Golf and Juniors.