Home Clubs/Courses The Majors Part 2 – The US Masters…

In the second in our series of articles on golf’s Major events, this time we turn our attention to the second oldest event in the golfing diary – The US Masters!

Every year we get excited about the upcoming golfing calendar with some enthusiasm.

Each year there are different players in contention and no one golf tournament is ever the same!

The ‘Grand Slam’ events in golf include:

Universally seen as the curtain opener to the golfing season, The US Masters began in 1934 and is the only Major that is always at the same venue each year – the glorious Augusta National in the US southern state of Georgia.

The idea for Augusta National was the brainchild of Clifford Roberts and Bobby Jones. Jones wanted to build a golf course after his retirement from the game. He sought advice from Roberts, who went on to become the Chairman of the club.

He sought advice from Roberts, who went on to become the Chairman of the club.

They found a piece of land in Augusta of which Jones is reported to have said: “Perfect! And to think this ground has been lying here all these years waiting for someone to come along and lay a golf course upon it!”

The land had been an indigo plantation in the early nineteenth century and a plant nursery since 1857. Jones hired Alister MacKenzie to help design the course, and work began in 1931.

The course formally opened in 1933, but sadly MacKenzie died before the first Masters Tournament was played.

However, MacKenzie was also the architect of other famous courses such as; Cypress Point and Royal Melbourne. (see South Moor GC)

The Championship is full of history and abides by some long-standing traditions….

Since 1949, a green jacket has been awarded to the champion, who must return it to the clubhouse one year after his victory.

Although it remains his personal property and is stored with other champions’ jackets in a specially designated cloakroom.

In most instances, only a first-time and currently reigning champion may remove his jacket from the club grounds.

A golfer who wins the event multiple times uses the same green jacket awarded upon his initial win (unless he needs to be re-fitted with a new jacket). 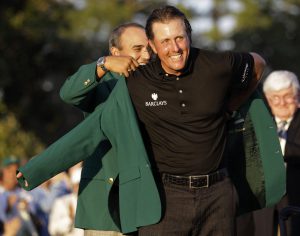 The Champions Dinner, inaugurated by Ben Hogan in 1952, is held on the Tuesday before each tournament and is open only to past champions and certain board members of the Augusta National Golf Club.

Beginning in 1963, legendary golfers, usually past champions, have hit an honorary tee shot on the morning of the first round to commence play.

However, this honour was given up to the BIG three in Arnie, Jack and Gary but sadly this is no longer possible following the death of Mr.Palmer in 2016.

Other that have had the privilege of this honour include Gene Sarazen, Sam Snead and Byron Nelson.

Finally, the newest event at The US Masters is probably the best loved – The Par 3 Championship started in 1960, but it’s no indication of who will win the main event…. the winner of this Par 3 contest has never won the main event!

The US Masters – Qualifying…

The Masters has the smallest field of the major championships with around 100 players.

Unlike other majors, there are no alternates or qualifying tournaments.

It is an invitational event, with invitations largely issued on an automatic basis to players who meet published criteria.

The top 50 players in the Official World Golf Ranking are all invited.

Past champions are always eligible, but since 2002 the Augusta National Golf Club has discouraged them from continuing to participate at an advanced age….

Who is eligible for that all important invitation…

– The Current US Amateur champion and runner-up

– The first 12 players, including ties, in the previous year’s Masters Tournament

– The first 4 players, including ties, in the previous year’s U.S. Open

– The first 4 players, including ties, in the previous year’s Open Championship

– The first 4 players, including ties, in the previous year’s PGA Championship

– Most of the top current players will meet the criteria of multiple categories for an invitation.

– The US Masters Committee, at its discretion, can also invite any golfer not otherwise qualified.

The US Masters – Previous Winners…

The first winner of the Masters Tournament was Horton Smith in 1934. He repeated his win in 1936.

The player with the most Masters victories is Jack Nicklaus, who won six times between 1963 and 1986.

Player also became the tournament’s first overseas winner with his first victory in 1961.

It’s very difficult to predict the outcome of these events.

We all remember Jordan Speith’s now infamous collapse in 2016 allowing Brit Danny Willett to come up on the inside and steal the day.

As with many sports, modern technology now allows us to make a bet on our favourite players, even once the tournament has started.

However, if you are thinking of getting in on the action this year be sure you are using as respected and established company….

You can also now gamble on who finishes last, who takes the most putts across the week and even on who’s scores the most birdies but one of the recent innovations in picking the winner of The Major Championship is LIVE betting. E.g.  Betting on Live Golf Events*

* Bet responsibly (like the ad says, When The Fun Stops, STOP!)

There’s are plenty of reputable betting companies available on which to place a bet but ensure you are only using a recognised bookmaker who is also regulated by the UK Gambling Commission.

The US Masters – Our favourites… 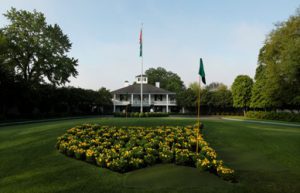 As we write this article we are still some weeks away from the US Masters, so its probably too early to predict our winner but this year could be a vintage year.

Tiger is back, Rory wants to add this Major to his portfolio, Henrik Stenson is hungry for more Majors but as last year showed it could be anyone.

Maybe we should look to Official World Golf Ranking for inspiration….

The US Masters – And finally…

With the US Masters no longer just one of Golf’s big events but also one of Sport’s great annual spectacles, and as such we will again be parked in front of the TV come 6th April….and we can’t wait!